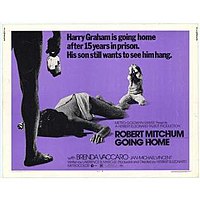 Going Home is a 1971 drama film directed by Herbert B. Leonard. Jan-Michael Vincent was nominated for a Golden Globe award for best supporting actor.

Harry Graham (Mitchum) is a lonely and beaten down man who has recently been released from prison, serving time for murdering his wife many years ago. His son Jimmy (Vincent) is after him seeking justice for his mother's murder. Jimmy tracks Harry down to a run-down seashore community where he is now living in a trailer park with his girlfriend Jenny (Vaccaro). When Jimmy at last confronts his father face to face, they both know they have to deal with many unresolved emotional barriers in their relationship.