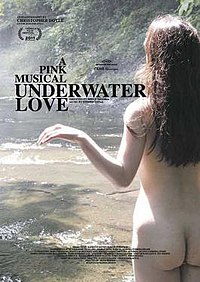 is a 2011 pink film musical about a woman and a sea creature. It is a co-production between Germany's Rapid Eye Movies and Japan's Kokuei Company. It was directed by Shinji Imaoka (who had earlier directed the pink films Lunch Box and Frog Song), shot by cinematographer Christopher Doyle and includes music by German band Stereo Total. Underwater Love was shot in 5 ½ days, one take only.

Asuka, a woman in her thirties, works in a lakeside fish factory. She's about to be married to her boss, Taki. But one day, she encounters a kappa – a water sprite found in Japanese folklore – and learns that the creature is in fact the reborn form of Aoki, an old crush who'd drowned to death when they were 17.