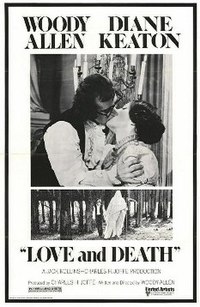 Love and Death is a 1975 American comedy film written and directed by Woody Allen. It is a satire on Russian literature starring Allen and Diane Keaton as Boris and Sonja, Russians living during the Napoleonic Era who engage in mock-serious philosophical debates. Allen considered it the funniest film he had made up until that point.

When Napoleon (James Tolkan) invades Austria during the Napoleonic Wars, Boris Grushenko (Woody Allen), a coward and pacifist scholar, is forced to enlist in the Russian army. Desperate and disappointed after hearing the news that Sonja (Diane Keaton), his cousin twice removed, is to wed a herring merchant, he inadvertently becomes a war hero. Boris returns and marries the recently widowed Sonja, who does not want to marry him, but promises him that she will, in order to make him happy for one night, when she thinks that he is about to be killed in a duel. To her surprise and disappointment, he survives the duel. Their marriage is filled with philosophical debates but no money. Their life together is interrupted when Napoleon invades the Russian Empire. Boris wants to flee but his wife, angered that the invasion will interfere with their plans to start a family that year, conceives a plot to assassinate Napoleon at his headquarters in Moscow. Boris and Sonja debate the matter with some degree of philosophical doublespeak, and Boris reluctantly goes along with it. They fail to kill Napoleon and Sonja escapes arrest while Boris is executed, despite being told by a vision that he will be pardoned. Boris' ghost bids goodbye to Sonja and the audience before dancing away with Death.