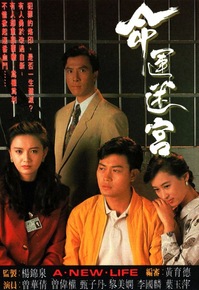 A New Life is a 1991 Hong Kong action crime drama television series produced by TVB and starring Margie Tsang, Savio Tsang, Donnie Yen and Kitty Lai. Originally released overseas on September 23, 1991, the series is currently rerunning on TVB's Network Vision channel starting from 16 January 2016 on weekends as a part of the special, Our... Donnie Yen (我們的...甄子丹), that began running on 11 January 2016.

Yam Chi-ho (Savio Tsang) was brought up in the triads and have been imprisoned on numerous occasions. Chi-ho was temporarily released from prison to attend his father's funeral, the police are tightly monitoring him, believing he will commit another crime, and thus, Chi-ho feels a great sense of stress. He later meets a passionate social worker, Ha Ching-man (Margie Tsang), who actively leads Chi-ho back on the right path. During one occasion, Chi-ho went to settle a dispute for his triad brother, causing his wife, Pui-kuen (Kitty Lai) to a miscarriage. Disappointed at how Chi-ho was unable to change his poor habits, Pui-kuen breaks up with him. While Chi-ho felt guilty, Ching-man comforts him and inspires him to reform.