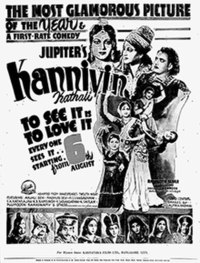 Kanniyin Kathali is a 1949 Indian Tamil-language romantic comedy film directed by K. Ramnoth, who produced it with A. K. Sekhar and wrote the screenplay. An adaption of the play Twelfth Night by William Shakespeare, it stars Madhuri Devi, Anjali Devi and S. A. Natarajan. The film revolves around the twins Adithan and Chandrika, who are separated in a shipwreck. Chandrika (who is disguised as a man) falls in love with Prince Vasanthakumar, who in turn is in love with Megala Devi. Upon meeting Chandrika, Megala falls in love with her, thinking she is a man. Kanniyin Kathali was released on 6 August 1949.

Prince Adithan and his twin sister Princess Chandrika are separated in a shipwreck. Chandrika is shipwrecked on the coast of the Vasanthapuri Kingdom and she comes ashore with the help of a fisherman. She loses contact with Adithan, whom she believes had drowned. Disguising herself as a young man under the name "Kalaimani", she enters the service of Prince Vasanthakumar's palace, who posed at the Royal Poetry Position.