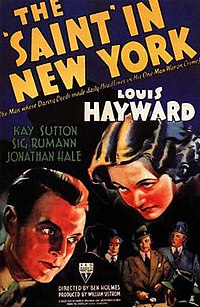 The Saint in New York is an American 1938 crime film, directed by Ben Holmes and adapted from Leslie Charteris's 1935 novel of the same name by Charles Kaufman and Mortimer Offner. After a police lieutenant is killed, the New York Police Department enlists gentleman criminal Simon Templar to fight criminal elements in the city.

Police Lieutenant Martin, an officer leading the fight against New York gangsters, is killed. Jake Irbell is arrested and charged with his murder, but has to be released when prosecution witnesses are either coerced into changing their testimony or simply disappear. A civilian crime commission demands action of the police commissioner, but he has no fresh ideas. William Valcross (Frederick Burton), a respected leading citizen and member of the commission, suggests they resort to drastic measures and recruit Simon Templar (Louis Hayward), the "Saint", a British amateur Detective with a reputation for dealing with criminals outside the law. The commissioner reluctantly agrees to give the Saint free rein to do what he must.