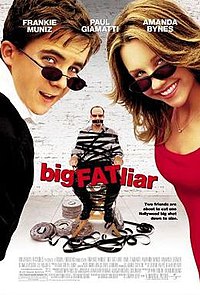 Jason Shepherd, a 14-year-old compulsive liar living in Greenbury, Michigan, tries to lie his way out of a creative writing assignment but gets caught by his English teacher, who alerts his parents. He is given three hours to submit his essay and avoid repeating English in summer school. Inspired by his talent for lying, Jason writes a story titled "Big Fat Liar". While riding his sister's old bike to turn in the essay, Jason is run over by the limousine of an arrogant Hollywood screenwriter and producer, Marty Wolf, and he convinces Marty to give him a ride. Marty, also a compulsive liar, is in town shooting his film Whitaker and Fowl. In a rush, Jason accidentally leaves his essay in the limo when it falls out of his backpack. Inspired, Marty keeps the story for himself. Realizing his essay is missing, Jason tries to explain what happened, but he is sent to summer school.