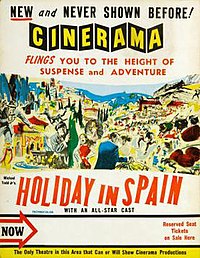 Scent of Mystery is a 1960 mystery film, the first to use the Smell-O-Vision system to release odors at points in the film's plot. It was the first film in which aromas were integral to the story, providing important details to the audience. It was produced by Mike Todd, Jr., who, in conjunction with his father Mike Todd, had produced such spectacles as This Is Cinerama and Around the World in Eighty Days.

A mystery novelist, played by Denholm Elliott, discovers a plan to murder an American heiress, played by Elizabeth Taylor in an uncredited role, while on vacation in Spain. He enlists the help of a taxi driver, played by Peter Lorre, to travel across the Spanish countryside in order to thwart the crime.