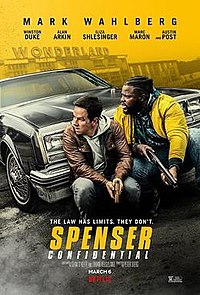 Boston police detective Spenser arrives with his partner, Driscoll, to the home of Captain John Boylan. While questioning Boylan about concerns he had regarding the murder investigation of a woman named Gloria Wiesnewski, Spenser catches sight of Mrs. Boylan's bloody face and reacts violently, beating Boylan senseless. Spenser is brought up on multiple charges as a result of this incident, to which he pled guilty, and was sentenced to prison for his actions.