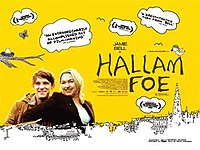 Hallam Foe is a 2007 British drama film directed by David Mackenzie based on the novel written by Peter Jinks. The film was released in the United States as Mister Foe. The screenplay was written by Ed Whitmore and David Mackenzie and produced by Gillian Berrie.

Hallam Foe (Jamie Bell) is a teenage loner who lives on his father's (Ciarán Hinds) large estate near Peebles. His hobby is spying on people from his tree house. Hallam is convinced that his stepmother, Verity (Claire Forlani), is responsible for his mother's death by drowning two years earlier. Hallam's sister leaves home to attend university and it becomes clear that Verity and his father want Hallam to move on as well. Hallam initially refuses due to his suspicion of Verity, but she uses his diaries first to have sex with him and then to blackmail him into leaving. To escape his father and stepmother, Hallam travels to Edinburgh.