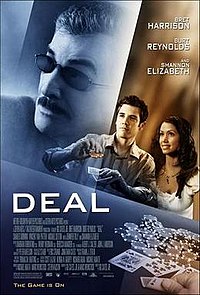 Alex Stillman (Bret Harrison) is a law student who plays poker online and in home games. He competes in an online tournament where the final table is played live on TV. Alex reaches the final table, but is eliminated first after being outmatched by professional player Karen "The Razor" Jones. The final table broadcast is watched by retired player Tommy Vinson (Burt Reynolds), who feels that Alex has potential as a player but could use his help. Vinson tracks Alex down at a cash game and offers him his business card, which Alex refuses until Tommy impresses him by reading his last hand.