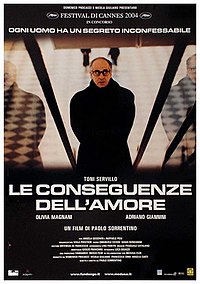 The Consequences of Love 2004

The Consequences of Love is a 2004 Italian psychological thriller film directed by Paolo Sorrentino. It tells the story of a lonely and secretive Italian businessman living in a Swiss hotel. The film competed at the 2004 Cannes Film Festival. It won five David di Donatello awards including Best Film, Best Director and Best Actor. It was also the first film to achieve widespread critical acclaim for Sorrentino.

Titta Di Girolamo is a middle-aged loner who has spent the last eight years living in an upmarket hotel in Lugano, Switzerland. Every day he puts on his suit and wanders around, avoiding contact with people. In the morning, he solves the chess puzzles in the paper and in the evening he plays Grabber with a bankrupt aristocratic couple who are marooned in the hotel they used to own. Occasionally, he rings his family in Italy but his wife is always reluctant to talk, and his grown-up children despise him. He develops feelings for Sofia, the beautiful and stylish waitress at the bar of the hotel but he refuses to speak to her because, in his shyness, he fears that love would complicate his monotone but quiet life.