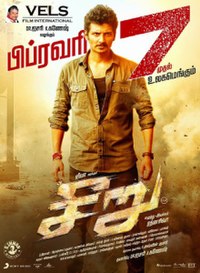 Seeru is a 2020 Indian Tamil-language action film written and directed by Rathina Shiva. The film stars Jiiva, Riya Suman, Gayathri Krishnaa and Navdeep in the lead roles, with Varun and Sathish in supportive roles. D. Imman composes music for the film and the film is bankrolled by Ishari K. Ganesh under his production studio Vels Film International. Principal photography commenced on 4 December 2018. The film was released on 7 February 2020 and opened to positive reviews.

The film starts off with two girls driving on the road when they are stopped by two policemen, who proceed to attempt to rape them. One of the girls sends a voice message in a WhatsApp group telling their situation. Manimaran (Jiiva) hears the message and rescues them. He is from a neighbouring place called Mayavaram where he runs a local TV channel called Kokkarako TV. This is opposed by the MLA (R. N. R. Manohar), who keeps getting outsmarted by Maran. Exasperated, he pays a local goon named Vyasarpadi Malli (Varun) to kill him. Malli reaches Maran's home, where his pregnant sister Ilakkiya (Gayathri Krishnaa) goes into labour.