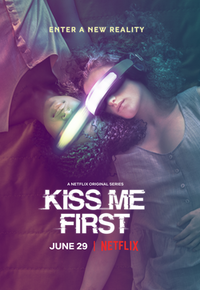 Kiss Me First is a British cyber-thriller drama series created by Bryan Elsley for Channel 4 and Netflix. The series began airing on 2 April 2018 on Channel 4. The series was made available on Netflix worldwide on 29 June 2018.

Leila is a lonely 17-year-old girl addicted to a fictional massively multiplayer online role-playing game called Azana. While playing it, Leila meets Tess, a cool and confident party girl who harbours a dark secret. In the real world, the two girls become friends, but after Tess disappears Leila is quickly drawn into unravelling the mystery behind her disappearance.