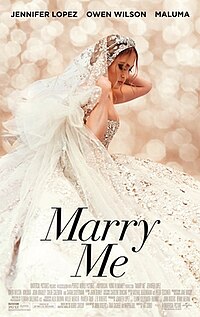 Marry Me is an upcoming American romantic comedy-drama film directed by Kat Coiro, with a screenplay by John Rogers, Tami Sagher and Harper Dill, based on the graphic novel of the same name by Bobby Crosby. The film will star Jennifer Lopez, Owen Wilson, Maluma, John Bradley, and Sarah Silverman.

After learning that her on-stage partner (Maluma) has been having an affair behind her back, Kat Valdez (Jennifer Lopez), a sensational Latin pop star, chooses to marry a stranger, Charlie Gilbert (Owen Wilson), holding a "Marry Me" sign by accident at her live concert.