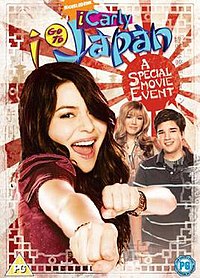 iGo to Japan (also known as iCarly: iGo to Japan) is a 2008 television movie based on the Nickelodeon TV series iCarly. It was premiered on November 8, 2008 on Nickelodeon, and November 21 on YTV. It has also been broadcast divided in three-parts of second season that serve as the first film of the series. The television movie stars Miranda Cosgrove, Jennette McCurdy, Nathan Kress, Jerry Trainor and Mary Scheer. The film was directed by Steve Hoefer. The production of the film began in the spring of 2008, and lasted around 4 to 5 weeks.

The iCarly gang are invited to a trip to Tokyo after being nominated for the annual iWeb Awards, where in order to qualify, they will be expected to perform a skit live on stage. Prior to their trip, they create a sketch called Melanie Higgles: Space Cheerleader.