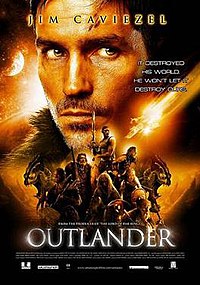 A spacecraft crashes in a lake in Vendel-era Scandinavia (550-790). The only surviving occupant a human retrieves a distress beacon and a computer which explains that he is on Earth, a "seed" colony that his people have abandoned. The computer downloads the local Norse language and culture directly into his brain. The spaceman soon finds a freshly destroyed village, where he is captured by Wulfric (Jack Huston), a warrior from another village.