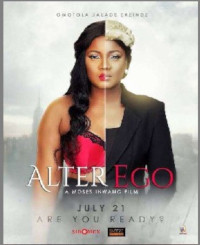 Alter Ego tells a story of a successful lawyer who has dedicated a great part of her professional life to prosecuting sex offenders. She adopts any measure possible to see that sex offenders, especially those who molest children, are jailed. Ada Igwe (Omotola Jalade) does not only rely on the law to exert punitive measures on offenders as she also uses unorthodox methods to make sure those she finds guilty of child molestation and sex offences pay for their crimes.