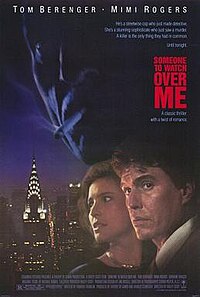 Someone to Watch Over Me is a 1987 romantic crime thriller film starring Tom Berenger and Mimi Rogers and directed by Ridley Scott. The film's soundtrack includes the George and Ira Gershwin song from which the film takes its title, here sung by Sting, and Vangelis' "Memories of Green", originally from Scott's Blade Runner.

Socialite Claire Gregory (Mimi Rogers) attends a party and art show sponsored by one of her oldest friends, Winn Hockings (Mark Moses). Accompanying her is her straitlaced boyfriend, Neil Steinhart (John Rubinstein). In another part of town, there is another party, this one for newly appointed NYPD detective Mike Keegan (Tom Berenger).