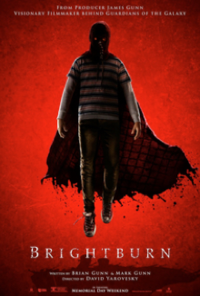 Brightburn is a 2019 American supervillain horror film directed by David Yarovesky, written by Mark Gunn and Brian Gunn, and produced by James Gunn and Kenneth Huang. Starring Elizabeth Banks, David Denman, Jackson A. Dunn, Matt Jones and Meredith Hagner, the plot follows Brandon Breyer, a young boy of extraterrestrial origin reared on Earth who realizes he has superpowers. Upon learning of them and finding the ship he arrived in, Brandon rejects his humanity and turns to evil, opting to terrorize his hometown, including his parents. The film was produced and financed by Screen Gems, Stage 6 Films, The H Collective and Troll Court Entertainment.

In 2006, a spaceship crashes in Brightburn, Kansas. Tori and Kyle Breyer, who are unable to conceive a child, look inside to find an infant. The couple adopts the child and names him Brandon. They hide the spaceship in their barn to conceal the truth from him.