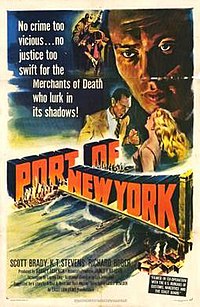 Port of New York is a 1949 American film noir crime film directed by László Benedek with cinematography by George E. Diskant and shot in semidocumentary style. The film is notable for being Yul Brynner's first movie. He had not begun shaving his head yet. The film, which is very similar to T-Men (1947), was shot on location in New York City.

The film narrated by Chet Huntley (future NBC nightly newscaster) tells the story of a two federal agents, one from Customs and one from Narcotics, out to stop the distribution of opium that came in on a ship in the Port of New York but was smuggled off by drug dealers. The leader of the drug dealers is the suave Paul Vicola (Brynner).