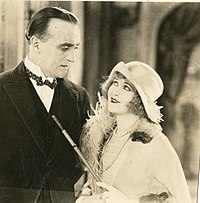 The Gold Diggers is a lost Warner Bros. silent comedy film directed by Harry Beaumont with screenplay by Grant Carpenter based on the play The Gold Diggers by Avery Hopwood which ran for 282 performances on Broadway in 1919 and 1920. Both the play and the film were produced by David Belasco. The film stars Hope Hampton, Wyndham Standing, and Louise Fazenda. It was also the (uncredited) film debut of Louise Beavers.

Wally Saunders (Johnny Harron) wants to marry chorus girl Violet Dayne (Anne Cornwall), but his uncle, Stephen Lee (Wyndham Standing) thinks that all chorines are gold diggers (people who date others to get money from them) and refuses to give his approval. Violet's friend Jerry La Mar (Hope Hampton) is not a gold digger, but she agrees to go after Lee so aggressively that Violet will look tame by comparison. Of course, the uncle and the friend fall in love and get married, even after he knows the truth about her, and he gives permission for Wally and Violet to get hitched too.