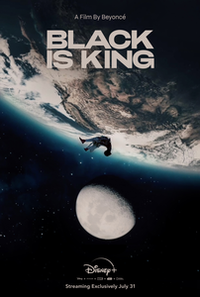 Black Is King is a 2020 American musical film and visual album directed, written, and executive produced by American singer Beyoncé. The film serves as a visual companion to the 2019 album The Lion King: The Gift, a tie-in album curated by Beyoncé for the 2019 remake of The Lion King. It tells the story of a young African prince (Folajomi Akinmurele) who is exiled from his kingdom after the death of his father. As he grows up into a man (Nyaniso Dzedze), the prince undergoes a journey of self-identity, using the guidance of his ancestor (Beyoncé), childhood love (Nandi Madida) and his own subconscious (Stephen Ojo) to reclaim his throne. The story is told through black voices of today.

A young African king is cast out from his family into an unforgiving world. He subsequently undergoes a journey "through betrayal, love and self-identity" to reclaim his throne, using the guidance of his ancestors and childhood love. The story is told through the voices of present-day black artists.