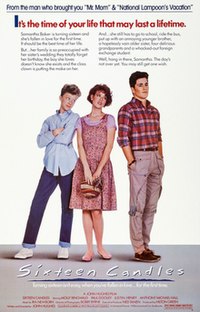 Sixteen Candles is a 1984 American coming-of-age comedy film starring Molly Ringwald, Michael Schoeffling, and Anthony Michael Hall. It was written and directed by John Hughes in his directorial debut.

In 1984, high school sophomore Samantha "Sam" Baker is hopeful her 16th birthday is the beginning of a great new year, but is shocked when her family forgets because her older, vain sister Ginny is getting married the next day. Her frustration is compounded by the fact that her crush, senior Jake Ryan, has no idea how she feels.