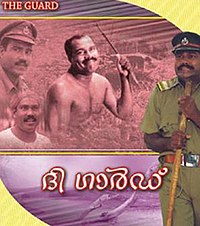 The Guard (Malayalam:ദി ഗാർഡ്) is a Malayalam language movie with a single actor in the cast. Released in December 2001, the Indian Malayalam feature film has Kalabhavan Mani, the only actor on screen, playing the role of a forest guard in a lonely, isolated dense forest. Directed and written by debutante Hakim Rawther, it is jointly produced by Sabitha Jayaraj (Green Dragon Movies) and Kerala State Film Development Corporation (KSFDC).

The story in a nutshell is how a poor man, Appukuttan Nair (Kalabhavan Mani) gets a job as a forest guard. His first appointment is in a lonely, isolated dense forest. His predecessor there was one Thomachan, who was supposedly trampled to death by a tusker. Anyhow, Appukuttan takes charge and in the dense forest he is left all alone, save the innumerable animals and birds around him and the frightening sounds of the jungle. But life in the jungle teaches him many things about men and human society and he gets a new perspective to look at things.