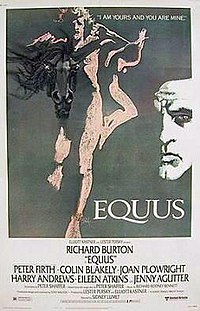 Equus is a 1977 psychological drama film directed by Sidney Lumet and written by Peter Shaffer, based on his play of the same name. The film stars Richard Burton, Peter Firth, Colin Blakely, Joan Plowright, Eileen Atkins, and Jenny Agutter. The story concerns a psychiatrist treating a teenager who has blinded horses in a stable, attempting to find the root of his horse worship.

Hesther Salomon, a magistrate, asks her platonic friend Martin Dysart, a disillusioned psychiatrist who works with disturbed teenagers at a hospital in Hampshire, England, to treat a 17-year-old stable boy named Alan Strang after he blinded six horses with a sickle. With Alan only singing TV commercial jingles, Martin goes to see the boy's parents, the non-religious Frank Strang and his Christian fundamentalist wife Dora. She had taught her son the basics of sex and that God sees all, but the withdrawn Alan replaced his mother's deity with a god he called Equus, incarnated in horses. Frank discloses to Martin that he witnessed Alan late at night in his room, haltered and flagellating himself, as he chanted a series of names in Biblical genealogy-fashion which culminated in the name Equus as he climaxed.