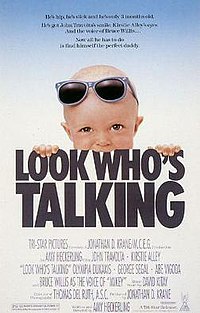 Look Who's Talking is a 1989 American romantic comedy film written and directed by Amy Heckerling, and starring John Travolta and Kirstie Alley. Bruce Willis plays the voice of Mollie's son, Mikey. The film features George Segal as Albert, the father of Mikey.

Mollie is an accountant living in New York City who has an affair with Albert, a womanizing executive who is married with two children, and becomes pregnant. During her pregnancy, Mollie and Albert keep their indiscretion secret, under the idea she was artificially inseminated, and that Albert plans to leave his wife Beth and their two children to be with her. The baby, while growing inside Mollie, begins to make voice over commentary and demands - like tugging on his umbilical cord and requesting apple juice, which she gulps down. In her ninth month, while out shopping, Mollie and her friend Rona catch Albert fooling around with his interior decorator Melissa, and he admits he is planning on living with her after his divorce is finalized.