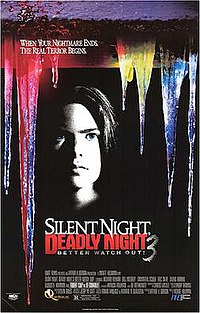 Silent Night, Deadly Night III: Better Watch Out! is a 1989 American slasher film written and directed by Monte Hellman. A direct-to-video release, the film is the second sequel to the 1984 film Silent Night, Deadly Night and centers around the Christmas-obsessed killer Ricky Caldwell awakening from a coma and stalking a blind teenager with psychic powers, while she travels to her grandmother's house for the Christmas holiday with her brother and his girlfriend. It was the last to follow the storyline set by the previous two films, the next two sequels being standalone entries.

After being shot down by police at the end of the previous film, the infamous Santa Claus Killer Richard "Ricky" Caldwell has been left comatose for six years, with a transparent dome being affixed to his head by the doctors in order to repair his damaged skull. Wanting to contact Ricky, the eccentric Dr. Newbury begins using a blind clairvoyant girl named Laura Anderson to try reach out to him. One Christmas Eve, after a particularly traumatic session with Newbury, Laura begins to regret her participation in his experiment, but Newbury tries to convince her to keep trying, saying that they can talk more after Laura returns home from visiting her grandmother over the holiday. After Laura is picked up from the hospital by her older brother Chris, a drunk hospital employee dressed as Santa Claus wanders into Ricky's room and begins taunting him, rousing Ricky back to consciousness. Killing the Santa impersonator Ricky escapes from the hospital, taking a letter opener with him after killing a receptionist as well.