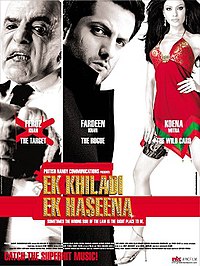 Ek Khiladi Ek Haseena (translation: One Player, One Beauty) is a 2005 Indian Hindi crime thriller film directed by Suparn Verma. It is a remake of the 2003 Hollywood crime drama movie Confidence. This movie was another movie in which the father-son duo Fardeen Khan and Feroz Khan had worked. Before this, they had worked in the 2003 movie, Janasheen. This movie was the first lead role for actress Koena Mitra, who was previously seen in small roles.

Ek Khiladi Ek Haseena focuses on the duo of Arjun Verma (Fardeen Khan) and his best friend Rohit (Rohit Roy) who con people for a living.