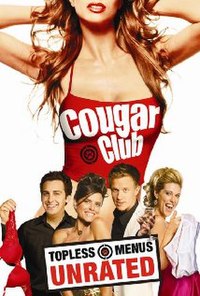 Cougar Club is a 2007 American film directed by Christopher Duddy. The film details the attempts of two college graduates, Marshall Hogan III and Spence Holmes, to find direction in life. While working as interns for abusive divorce lawyers, they come up with a plan to make money from the passion that is Hogan's pride and Spence's secret desire: having sex with cougars. Some of the "cougars" are played by actresses such as Faye Dunaway and Carrie Fisher.

Having no family, Marshall Hogan III (Warren Kole) has been granted residency in the house of his best friend Spence Holmes (Jason Jurman). But Hogan has a sexual habit that makes Spence's dad and girlfriend (Kaley Cuoco) fear that Spence could adopt it, too. It is an attraction to older—if not just plain old—women.