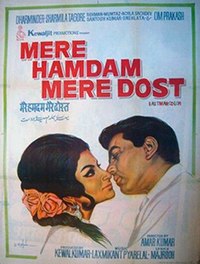 Mere Hamdam Mere Dost is a 1968 film starring Dharmendra, Sharmila Tagore, Rehman, Mumtaz and Om Prakash. The music is by Laxmikant Pyarelal and the lyrics by Majrooh Sultanpuri. The film is directed by Amar Kumar and produced by Kewal Kumar under the production banner Kawaljit Productions. The movie was a blockbuster.

Sunil (Dharmendra) lives a middle class life with his mother and sister in Delhi. He works for Chopra & Co., Chartered Accountants. He comes across a beautiful woman posing for a painting, and thinks she is poor and needy, and gives her a tip. The woman's name is Anita, and both are attracted to each other. Sunil and Anita intend to marry, and Sunil even introduces Anita to his mother. One day when attending a party, Sunil is shocked to learn that Anita is a multi-millionaire. Stunned at this deception, he swears he will have nothing to do with her. When Anita attempts to soothe things over, Sunil does cool down. It is then he finds out that Anita's dad, who is serving time, had killed his father, and that Anita's mother is still alive, after making her living as a former prostitute.