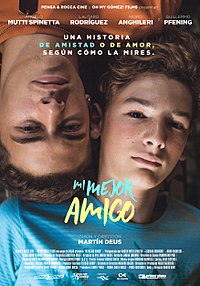 My Best Friend (Spanish: Mi mejor amigo) is an Argentinian film, written and directed by Martín Deus which was released on November 8, 2018. It stars Angelo Mutti Spinetta and Lautaro Rodríguez.

Lorenzo (Angelo Mutti Spinetta), a teenager who lives in Patagonia, receives Caíto (Lautaro Rodríguez), the son of some friends of the family who are going through a serious situation and cannot take care of him. Caíto is a troubled young man who has difficulty adapting. In spite of the differences they have a peculiar friendship, where each one learns a lot from the other. One day Caíto tells him the real reason why he had to leave his house. From then on, Lorenzo will have to take charge of a secret too heavy to carry.