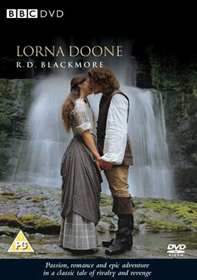 Lorna Doone is a British romance/drama television movie version of Richard Doddridge Blackmore's 1869 novel of the same name and aired on BBC One from 24 to 26 December 2000 in the UK and on A&E on 11 March 2001 in the U.S. The film won the Royal Television Society's Television Award for Best Visual Effects by Colin Gorry.