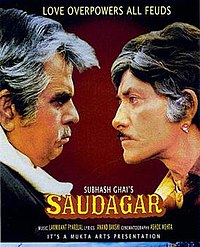 Saudagar is a 1991 Indian Hindi drama film, directed by Subhash Ghai. It starred two veteran actors of the Hindi silver screen of yesteryear, Dilip Kumar and Raaj Kumar, in the leading roles. It was the second film in which the two actors came together after the 1959 film Paigham. It featured the debut performances of Vivek Mushran and Manisha Koirala, the latter became a noted Bollywood actress in later years. Amrish Puri, Anupam Kher, Mukesh Khanna, Dalip Tahil, Gulshan Grover, Dina Pathak and Jackie Shroff are also featured in the movie. The story line is influenced by the famous play Romeo and Juliet and Mandhaari's role is parallel to that of Friar Laurence in Romeo and Juliet.

The movie starts with Mandhari, an old crippled man, telling a story of two friends to some kids. In the story, Rajeshwar Singh, a landlord's son, and Veer Singh, a poor boy, become friends. They are naughty kids, calling each other as Raju and Veeru respectively. As the duo grow up, Raju decides to get his sister Palikanta's marriage arranged with Veeru. Neither his sister nor Veeru have any objections to the marriage.