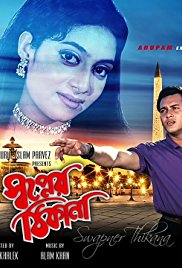 Shopner Thikana (; Translation: The Address of the Dream) is a Bangladeshi feature film released on 11 May 1995 directed by M. A. Khaleq. This romantic drama film was released on Eid vacation and was a huge success throughout Bangladesh.

Sumon and Shathi are two class friends from childhood. At once they fall in love. Farha, the only daughter of Sumon's father's friend also loves Sumon but Sumon thinks of her as just a friend.