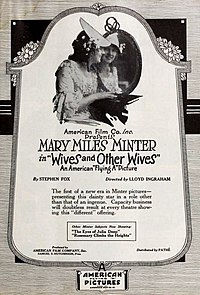 Wives and Other Wives is a lost 1918 American silent comedy-drama film directed by Lloyd Ingraham based on a story by Jules Furthman. The film stars Mary Miles Minter and Colin Chase in the lead roles.

Based upon a review in a film magazine, Geoffrey Challoner (Chase) finds his bride of a few days Robin (Minter) burning some letters, and he becomes insanely jealous. A few days later, Norman Craig (Garwood) blunders into the Challoner apartment and Robin fires a gun, thinking him to be a burglar. Norman faints from fright and Robin flees, thinking that she killed him. Geoffrey finds Norman in his wife's rooms and decides upon divorce. Before the case goes to trial, Geoffrey makes the same mistake and blunders into Mrs. Craigs's (Shelby) room. A real burglar shows up to complicate the situation. In the end, it turns out that the letters Robin had been burning were from her husband Geoffrey.