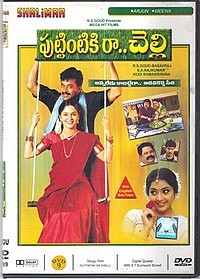 Puttintiki Raa Chelli is a 2004 Indian Telugu-language film directed by Kodi Ramakrishna and produced by R. S. Goud and Basavraj. It stars Arjun, Meena and Madhumitha. It was released on 14 April 2004, became a super hit at the box office and was re-shot and released in Tamil as Anbu Sagotharan with Manivannan, Senthil and Shakeela. The movie is a remake of the 2002 Kannada film Thavarige Baa Thangi.