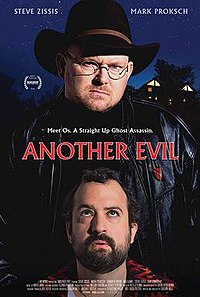 Another Evil is a 2016 comedy horror film that was written and directed by Carson Mell. The movie had its world debut on March 12, 2016 at the South by Southwest Film Festival and stars Steve Zissis, a man who hires a ghost hunter (Mark Proksch) to rid his house of ghosts but finds that he instead wishes to rid himself of the hunter.