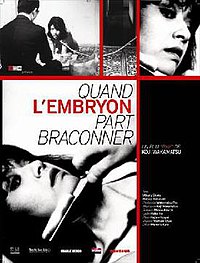 The Embryo Hunts In Secret 1966

, released in July 1966, is the first film made by Japanese director Kōji Wakamatsu independently of any movie studio. It was released just months after he had left Nikkatsu and formed his own company, Wakamatsu Productions.

A man keeps his girlfriend tied up in his small apartment and tortures her. She is undressed, subjected to various types of bondage, whipped, and tortured with a razor blade. He also brushes her hair, applies make-up on her, and breaks down and cries in the fetal position. In the end the girl gets free and has her revenge.