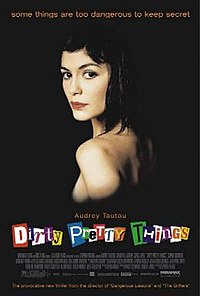 Dirty Pretty Things is a 2002 British social thriller film directed by Stephen Frears and written by Steven Knight. Following the lives of two immigrants in London, it was filmed in a documentary style and was produced by BBC Films and Celador Films, and distributed by Buena Vista International through Miramax Films.

Okwe is an illegal West African immigrant (home country not initially named) to the United Kingdom who drives a cab in London during the day and works at the front desk of a hotel at night. The hotel is staffed with many immigrants, both legal and illegal. Okwe keeps himself awake by chewing khat, a herbal stimulant. A doctor in his home country, he was forced to flee after being falsely accused of murdering his wife. In London, he is pressed into giving medical treatment to other poor immigrants, including fellow cab drivers with venereal diseases. Okwe's friend Guo Yi, an employee at a hospital mortuary, provides him with antibiotics under the table.