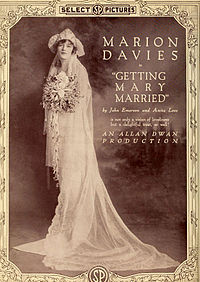 Getting Mary Married is a 1919 silent American comedy film directed by Allan Dwan and starring Marion Davies. It was distributed by the Select Pictures Corporation.

Marion Davies stars as a young woman who is left a fortune but only if she can fulfill her step-father's will by remaining unmarried and living with his brother Amos' family for a year. Of course if Mary refuses or is unable to do so the fortune instead goes to Amos and he has been waiting years for a chance at his brother's money. Amos has his plans to get the money and when handsome bachelor James Winthrop shows, up Mary things become even more complicated.