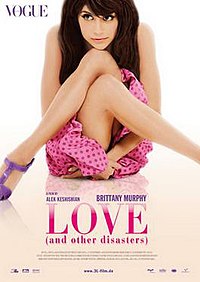 Love and Other Disasters 2006

Love and Other Disasters is a 2006 French-British romantic comedy film produced by Ruby Film, EuropaCorp and Skyline Films presented at the Toronto International Film Festival. In 2008, it had its UK premiere in London as the gala screening for the BFI 22nd London Gay and Lesbian Film Festival. The director and producer were in attendance. Brittany Murphy portrays an assistant at British Vogue who is the catalyst for a group of young friends as they try to find love. OutFest 2007 presented the film as one of their features. Originally director Alek Keshishian had wanted Gwyneth Paltrow to play 'Jacks' but she was at the time pregnant, later Paltrow got a cameo role.

Emily "Jacks" Jackson, who spent her childhood in America, now lives and works in London, at British Vogue, and shares an apartment with her gay friend Peter Simon, a screenwriter. Afraid to be disappointed by a serious relationship, Jacks prefers to spend her free time with her friends and sleep with her ex-boyfriend, James, whom she doesn't love. Peter, who has never been in a relationship, spends too much time in his dreams and as a result cannot fall in love with a real person. It gets more complicated with the entrance of Paolo, a photography assistant for one of the photographers at Vogue. As the film develops, they come to realize their mistakes and eventually reach their happy endings.