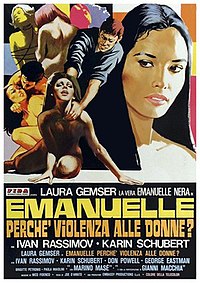 Emanuelle Around the World 1977

Emanuelle Around the World is a 1977 sexploitation directed by Joe D'Amato. The film stars Laura Gemser and George Eastman, Karin Schubert and Ivan Rassimov.

After meeting United Nations diplomat Dr. Robertson in New York City, journalist Emanuelle is invited to India to write a report on Guru Shanti, a man who claims to have achieved the ultimate orgasm. Once there she engages in a variety of sex acts, including one with the Guru, disproving his theory. She then heads to Hong Kong to investigate trafficked women and witnesses them being subjected to forced Bestiality. Upon her return to San Francisco in the United States, by way of Italy, she teams up with fellow reporter Cora Norman. The two snoop out a trail of men smuggling women to the Middle East, involving members of the United States government.