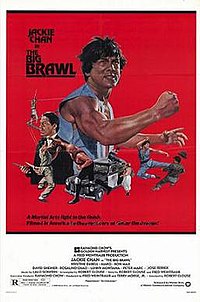 The Big Brawl, also known as Battle Creek Brawl, is a 1980 martial arts film which marked Jackie Chan's first attempt to break into the American movie market. A joint Hong Kong and American production, it was directed by Robert Clouse and featured much of the crew from Enter the Dragon.

Set in Chicago in the 1930s, Jerry Kwan (Jackie Chan) leads a very easy-going life with his girlfriend, Nancy (Kristine DeBell), and his family. His father owns a restaurant, and one day, he is threatened by the mob to pay a part of his profits. As the mob exits, Jerry enters the scene and rushes out the door to catch up with them. He answers back by taking them on and eventually catches the eye of the mob for his unique and talented fighting abilities. In effect, he is forced to join the Battle Creek Brawl fight in Texas. The mob promises to return his brother's fiancèe and give him the prize money as long as Jerry wins the tournament. He gets help from his uncle, a kung-fu teacher, to train him for the Battle Creek Brawl. They focus on Jerry's speed and agility as he must fight very tough opponents, one of them including Billy Kiss (H.B. Haggerty), the big, bulky, unbeatable winner from previous battles who kisses his opponents after they are defeated.