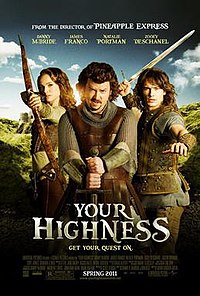 Your Highness is a 2011 American stoner comic fantasy film directed by David Gordon Green. It stars Danny McBride, James Franco, Natalie Portman, Zooey Deschanel and Justin Theroux. Written by McBride and Ben Best, the film was released on April 8, 2011. It follows an arrogant prince and his brother on a quest to kill the sorcerer and save the bride and their father's kingdom. The film received negative reviews from critics and was a box office bomb, grossing $28 million worldwide against a $50 million budget.

Thadeous and Fabious are sons of King Tallious in the Kingdom of Mourne. Fabious is dashing and skilled and Thadeous is lazy and ineffectual. While celebrating his latest victory over the evil sorcerer, Leezar, who has been ravaging Tallious's kingdom, Fabious introduces the virgin Belladonna whom he has freed from a tower and wishes to marry. Though his brother makes him the best man, Thadeous skips the wedding after overhearing Fabious' Knights Elite, led by Boremont, talk about him negatively. The wedding is then crashed by Leezar, who reveals himself to be the one who placed Belladonna in the tower. Leezar re-kidnaps her and flees. Returning to the castle with his servant and best friend Courtney, Thadeous is given an ultimatum: join Fabious on his quest to rescue Belladonna or be banished from Mourne.