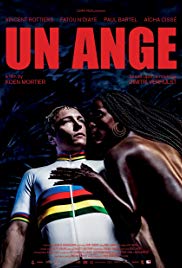 Angel is a 2018 Belgian drama film written and directed by Koen Mortier, and stars Vincent Rottiers and Fatou N'Diaye. It was screened in the Contemporary World Cinema section at the 2018 Toronto International Film Festival. The movie was based on the fictional novel, Monologue of Someone Who Got Used to Talking to Herself, by Flemish writer Dimitri Verhulst. In January 2019, it was nominated for the Magritte Award for Best Flemish Film.

Angel follows the encounter between a prostitute, Fae, and a star bicycle racer from Belgium, Thierry. During his holiday in Senegal, where Thierry has taken some time off after a racing mishap, he meets Fae and it is love at first sight. They find dignity and hope in each other as they strive to overcome their troubles. But more important than these mutual desires, they find love.