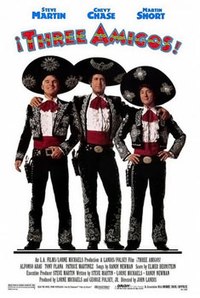 Three Amigos is a 1986 American western comedy film directed by John Landis and written by Lorne Michaels, Steve Martin, and Randy Newman, who wrote the songs for the film. Martin, Chevy Chase, and Martin Short star as the title characters, three silent film stars who are mistaken for real heroes by the suffering people of a small Mexican village. They must find a way to live up to their reputation and stop a marauding bandit.

In 1916, the bandit "El Guapo" and his gang are collecting protection money from the Mexican village of Santo Poco. Carmen, daughter of the village leader, searches for someone who can come to the rescue of her townspeople. While visiting a village church, she sees a silent film featuring "The Three Amigos", a trio of gunfighters that protect the innocent from evildoers. Believing them to be real heroes, Carmen sends a telegram asking them to come and stop El Guapo.