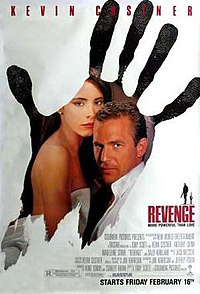 Revenge is a 1990 romantic thriller film directed by Tony Scott and starring Kevin Costner, Anthony Quinn, Madeleine Stowe, Miguel Ferrer and Sally Kirkland. Some scenes were filmed in Mexico. The film is a production of New World Pictures and Rastar Films and was released by Columbia Pictures. Revenge also features one of John Leguizamo's earliest film roles. The film is based on a novella written by Jim Harrison, published in Esquire magazine in 1979. Harrison co-wrote the script for the film.

Michael J. "Jay" Cochran (Kevin Costner) is a U.S. Navy aviator, retiring after 12 years in the service. He receives a matched pair of Beretta shotguns and an invitation from his wealthy friend, Tiburon "Tibey" Mendez (Anthony Quinn) to spend time at his hacienda in Mexico. Tibey is also a powerful crime boss, constantly surrounded by bodyguards.