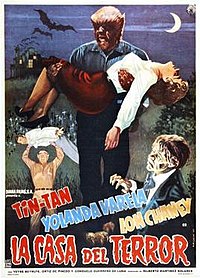 La Casa del Terror is a Mexican Monster movie starring Lon Chaney Jr. and Mexican comedian Tin Tan. The film involves Casimiro (Tin-Tan), a night watchman in a Wax Museum, whose boss, Professor Sebastian (Yerye Beirute), has been secretly draining his blood to use in his experiments in raising the dead. A mummy (Lon Chaney Jr.) who is stolen from an Egyptian sarcophagus is revived to life, and becomes a werewolf when moonlight hits him.

Casimiro (Tin Tan), the night watchman at a wax museum of horrors, has been napping more frequently on the job because his boss, Professor Sebastian (Yerye Beirute), is secretly draining blood from him while he sleeps to use in his experiments in raising the dead, experiments conducted in his hidden laboratory behind the wax museum.