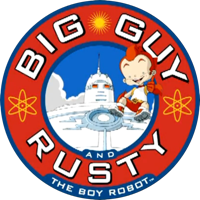 Big Guy and Rusty the Boy Robot, also known as The Big Guy and Rusty, is an American animated TV series based on the comic book of the same name by Frank Miller and Geof Darrow.

The series focuses on Rusty, the most advanced robot ever built, with a human emotional grid and "nucleoprotonic" powers. The plan by Quark Industries is that Rusty will replace the Big Guy, a massive war robot that is the Earth's last line of defence against all threats alien or domestic. However, Rusty is too inexperienced to stand on his own, so the Big Guy is re-commissioned to teach Rusty the way of trade. Rusty idolizes the Big Guy, regarding him as the best robot ever. In reality, the Big Guy is actually a mindless battle suit piloted by Lieutenant Dwayne Hunter, who poses as his chief mechanic. The Big Guy's secret is known only to a few, and many situations involve Lt. Hunter's clever and impromptu excuses to hide the fact from Rusty for two reasons: that the truth could overload Rusty's emotional grid and Rusty has trouble keeping secrets.